A New Era: How the Chicago White Sox Restructured 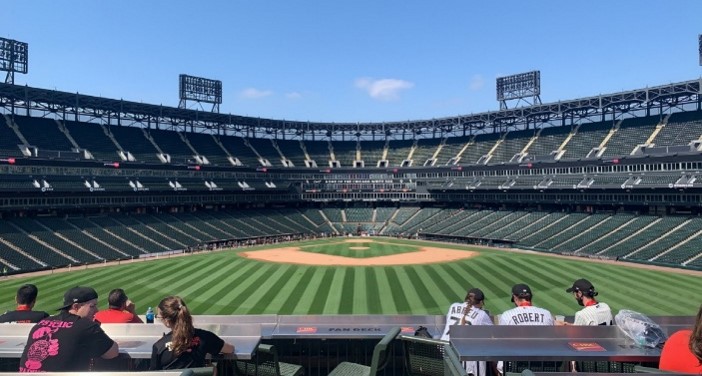 It’s December 6, 2016, and the Chicago White Sox are the talk of the baseball world as news came in that the organization dealt ace Chris Sale to the Boston Red Sox in exchange for top prospects. Sale. in seven years with the White Sox, was one of the best, if not the best player the organization had developed. The trade was a wakeup call for White Sox fans from the organization; it was the beginning of a long overdue rebuild, the beginning of a complete tear down after a decade’s worth of disappointing season after disappointing season. Here is a timeline of how the Chicago White Sox went from rebuilders in 2017 to now, rebuilt and ready to be contenders not just for the postseason, but for the World Series in 2021 and beyond.

The first year of the White Sox rebuild went just about as you would expect for a team that tore nearly everything apart to have full commitment to the future. After starting the season 15-12 heading into early May, things went back to reality. Both the White Sox hitting and pitching was bottom ten in the league by the season’s finish and the 2017 ball club had the 6th worst run differential in the league at -114. The 2017 season also saw more departures of the few remaining core players from the 2016 roster. By the trade deadline, the Sox had dealt third basemen Todd Frazier to the Yankees in a deal that also sent closer David Robertson and reliever Tommy Kahnle to the Bronx.

Starting pitcher Jose Quintana was also included in a trade to the crosstown rival Cubs, who were trying to get the pieces necessary to win their 2nd straight World Series. This deal sent their top two prospects (Eloy Jimenez and Dylan Cease) to the Southside. While there was nothing memorable about the 2017 season, it did see the debuts of some players who are currently playing big roles in the organization’s success. Yoan Moncada slashed his first eight big league home runs in 54 games and pitchers Reynaldo Lopéz and Lucas Giolito both had decent rookie seasons.

By the far the toughest year of the rebuild, The White Sox regressed in 2018 finishing with five fewer wins than 2017, giving the team their fourth 100 loss plus season in franchise history and their first since 1970. Saying that literally every player on the big league roster for the White Sox struggled in 2018 is an understatement. The team’s only All Star, Jose Abreu, also posted career lows in numbers.

It was also a tough season for some of the team’s younger players with potential big league stardom. For example, Yoan Moncada, in his first full season, struggled at the plate and struck out a total of 217 times (fourth on the all-time list). Along with Moncada’s struggles, young pitcher Lucas Giolito was arguably the worst in baseball, finishing the season with a horrendous 6.13 ERA. In a season full of misery, the only bright spot for the White Sox was the debut of one of the team’s top prospects. Michael Kopech. However, that did not last long as it was announced in September that he would have to undergo Tommy John surgery, missing the remainder of 2018 and all of 2019.

The great news for the Sox was that the worst years of their rebuild were behind them. While they certainly weren’t ready to contend, 2019 was bound to be an improvement from the disastrous and forgettable 2018 season. While the team may have still finished 17 games below .500, there was a lot to be excited about. Tim Anderson proved to the league that he was a force to be reckoned with by putting up career numbers, including a .335 batting average, (the AL batting title). His teammate and fellow infielder, Yoan Moncada, finally played to the hype, having a breakout year. He finished the season with a .315 batting average, hitting 25 homers. On the pitching side, after having one of the worst seasons in MLB history, Lucas Giolito had a turnaround season, with a 3.41 ERA. Giolito was named to the All Star Team with teammates Jose Abreu and James McCann.

2019 also saw the debut of two more of the organization’s top prospects acquired from the Cubs in the Quintana trade. Left fielder Eloy Jimenez hit 31 homers in his first 122 games and pitcher Dylan Cease showed potential on the mound when he debuted in August. With the young talent taking the next step in their big league careers, we could finally see some chemistry being formed in the White Sox dugout. By the end of the season, the fans knew they could officially put the worst years behind them.

GM Rick Hahn made quite a few improvements for the Sox heading into 2020. The biggest move that offseason was catcher Yasmani Grandal who is often regarded as a top five catcher in the league. To improve the pitching, Hahn signed veteran Dallas Keuchel, who won the AL Cy Young award in 2015, and the World Series in 2017 with the Houston Astros.

Along with the veteran additions, there would be some exciting Major League debuts to look forward to as Luis Robert, sometimes called “Mike Trout 2.0” and 2020 draft pick Garret Crochet would both debut in 2020. Unfortunately, the excitement had to be put on a pause, as the world came to a screeching halt in March 2020 due to the COVID-19 pandemic. After starting off the unique season in July at 10-11, the exciting group went on a 23-6 tear which lead them to their first playoff birth since 2008. By the end of the season, the team was 35-25 and finished in third place in the AL central. This earned the team an AL Wild Card berth. While the postseason run ended abruptly after a first round exit in a 2-1 wild card series loss to the Oakland Athletics, there was still a ton to have been proud about in 2020. The most notable achievements of the 2020 White Sox ball included veteran first baseman Jose Abreu winning his first AL MVP as he hit .317 with 19 homers and 60 RBI in 60 games. Their hitting as a team was also among the best in the league, scoring 306 runs in the season, the fifth best in the league. The teams run differential at +60 was also the third best in the league.

2021 and beyond
Following the conclusion of the 2020 season, the White Sox were already seen as top five favorites for the 2021 World Series. However, GM Rick Hahn made some major moves to improve the team. After questions surrounding the starting pitching, young arm Dane Dunning, who was sent to the White Sox in the 2016 offseason along with Reynaldo Lopéz and Giolito was dealt to the Texas Rangers in exchange for Lance Lynn. Lynn is often regarded as a “work horse” and one of the most consistent pitchers during his career The bullpen, already one of the teams strengths, also upgraded heading into the season, landing Liam Hendriks. Hendriks was the best closer in baseball in 2019 and 2020, helping his former team the A’s eliminate the White Sox in the 2020 postseason. The Sox also hired Hall of Fame manager Tony La Russa to lead the helm.

As the 2021 season ends, the White Sox have been dominating the AL Central and will be on their way to consecutive postseason appearances for the first time in franchise history. Even with injuries to some star players, it has been one the most memorable seasons for the team in a long time (arguably the most memorable since the World Series 2005 season) and have solidified themselves as a threat to the league and even more importantly, perineal contenders for the World Series, not just for 2021, but for years to come. The visions White Sox fans had for the team after a complete tear down in the 2016 offseason and three years of tough baseball seem to have come true.